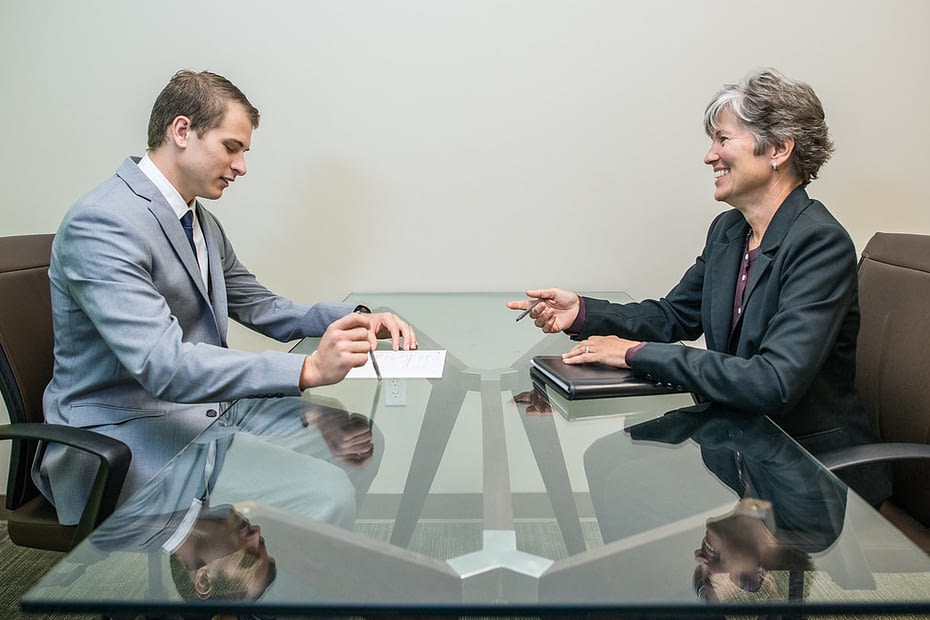 I once said “fuck” in the middle of a job interview.

A few months ago, I did a job interview via webcam. The kind where there is no interviewer, but you’re asked some generic questions and have to record yourself responding to them. It’s also the kind where you only get one or two tries to answer. I’m sure you can guess where this is going.

My dear friend Rachel Presents Rachel was with me giving me moral support. She’d done interviews like this before and had kindly agreed to help me through it. I’d gotten pretty good at interviews lately if I do say so myself, but webcam interviews where I had no one’s body language or facial expressions to work off of were surprisingly jarring to me, especially knowing that I only had two tries to get it right.

I tried to convince myself that having no interviewer present was a blessing, not a bout of bad luck. Surely it would be less intimidating to only have your own thoughts to sift through, and to have a straightforward question with no follow-ups, right?!

Needless to say, by the time I had finished scrambling to find a good room to hold the interview in, I was freaking out. Did I know enough about the company to make a personal connection to it? Would I be able to make eye contact with a webcam when I already struggled enough to make eye contact with an actual person? Would I be able to get all my points across within the one to two-minute time limit? What if there was some sort of technical problem? What if someone walked into the room while I was in the middle of answering a question? What would happen if I did a terrible job answering the question twice in a row and had no choice but to submit my terrible, terrible answer?

The first and second questions went…okay. I don’t even remember what I was asked, but it was something pretty standard like, “What made you want to work for [company]?” or “Tell me about yourself.” In between questions, Rachel Presents Rachel would help me to not freak the fuck out and coach me on preparing for the next question. It’s important to note that the questions didn’t start immediately, and you had about a minute to prepare before you answered, but somehow the preparation timer only served to make me overthink my answer more. And while the first two questions went “okay,” I wasn’t as happy with my answers as I would have liked, and I missed a lot of details that I’m confident I would’ve remembered if there was, y’know, an actual human being asking the questions.

Then comes the fun part. I fucked up the third question pretty badly. “You were doing great, but you psyched yourself out,” Rachel Presents Rachel told me. And she was right. My answer was nothing to write home about, but it wasn’t terrible and I could’ve recovered and continued instead of stopping the recording and using up my first try.

That’s when I really started to psych myself out. It dawned on me that I had used up my first try. I hadn’t needed to respond to the question twice for the first two. I’d had another life, another try. But not anymore.

If you don’t get it right this time, you have to send it in as is. If you fail, you’ll embarass yourself and there’s nothing you can do about it. Your other answers already weren’t that great, so you’d better get your shit together now or you’ll never be hired, here or anywhere.

I freaked out. Instead of using the one-minute prep time alotted, I wanted more than anything to just get the question over with and move on. I hit “Start.” The timer started. My last life was being used.

And I’d made a terrible mistake. Throughout the rest of the interview, Rachel Presents Rachel had been coaching me, and she continued to do so…but I hadn’t told her I’d started the actual recording. I’d panicked and hit “Start” without thinking, and she was still talking to me as the recording started.

Once again, I psyched myself out. I looked at her, eyes wide, and told her I’d already started the recording. To whoever watched my interview, I probably looked like a deer caught in headlights.

But it gets worse.

Upon realizing I’d screwed up the start of my second and final try, I panicked even further and did the only thing I can think to do when I’m confused and unsure of what to do.

“Fuck” slipped out of my mouth.

I’m not proud of it. I probably looked like a deer caught in headlights again to whatever poor soul ended up watching my interview. I remember covering my mouth with my hand as if that would somehow undo the irreversible mistake I had made.

Then I proceeded to panic once again and quickly shut off the recording. Meaning that the last impression the interviewer would get of my answer to that question would be me saying, “I started recording,” then “fuck,” staring at Rachel Presents Rachel in shock, staring at the camera in shock, covering my mouth, and then quickly scrambling to turn the recorder off.

The rest of the interview went fine. Or about as fine as an interview can get when you make a blunder that big. I answered the questions pretty half-heartedly, but at least I didn’t alternate between swear words or something. Instead, I managed to make myself extremely unremarkable after unleashing some profanity mid-interview.

Months later, it came as no big surprise when I got the official generic, “We’re sorry, but we had a competitive application pool and won’t be moving forward with your application, etc, etc.” By then, I’d long since made peace with my mistake, started to find it funny, even. I told the story on Snapchat and Instagram, and now I’m telling it to you.

I don’t really know what my message is in writing this. Laugh at your mistakes? Don’t psych yourself out? Don’t let embarassing moments get to you since everyone has them? Probably all of the above. I’ve learned to laugh at my mistakes enough to feel comfortable posting this incredibly unfortunate story to entertain all of you, and I think I’m happier for it.

And I hope the nameless interviewer who saw my fun little fuck-up got a kick out of it, too.