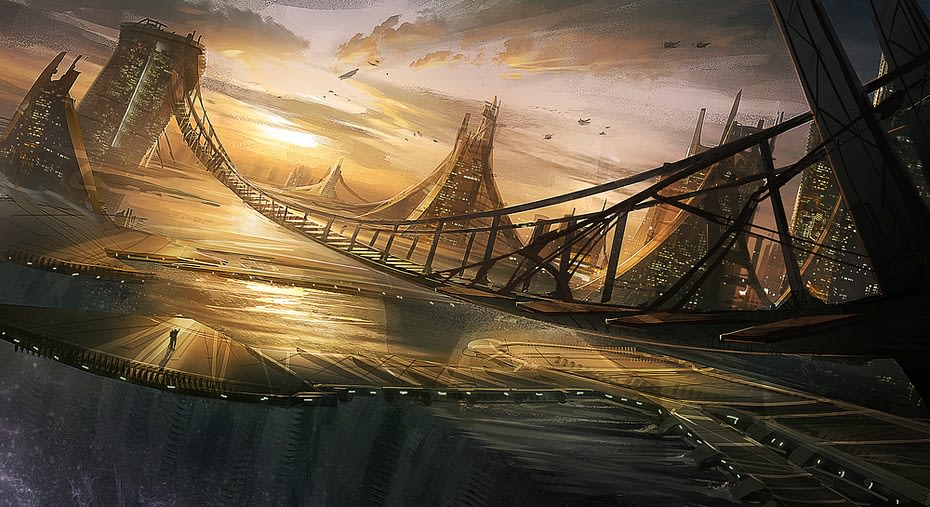 For the uninitiated reader:

I wrote this for a class my sophomore year of college, for a book I had once considered writing (and will now use the idea to post short stories from that universe to the site because I love creating fictional cities (like, a lot) and figured it might be fun to build some stories out of the worldbuilding instead of the other way around). It has gone through several iterations, but fingers cross this one is the final one. The main civilization, The Core City, is the biggest city in the world and the home to the most powerful entrepreneurs, politicians, and royalty/aristocrats. It’s also home to some of the most downtrodden outsiders. Think New York, but with magic and stuff. 🙂

Here are the separate districts that make up The Core City, in the style of Italo Calvino’s Invisible Cities.

The Districts of The Core City, Home to the Illustrious Cruxian People

Split the city into districts. To the southeast, a burst of color. An endless festival complete with music, dancing, and drinking well into the night and leaking into the morning. A wonderful but nonetheless ruthless assault on the nostrils as the scent of dozens—no, hundreds—of market stalls sprinkled throughout every street corner waft towards every passerby. Illusions, or perhaps real creations (who’s to say when an Imaginate is around?) waddling or crawling, floating or hopping, soaring or burrowing. Towering buildings littered with flashy, colorful advertisements—buildings that should not stand, but do stand, because an Imaginate wanted it to.

To the south, the lights shut off. It is quiet, always. The Psionic does not like the noise, with so much already crowded into his head. His abode, his “Silent District” is simplistic: a sector of towering, imposing structures of plain black and white marble, organized with surgical precision, and never painted or decorated with a color brighter than gray. Shops as straightforward as straightforward can be (“Book Store on Third Street,” “Men’s Clothing Store on 9th Avenue,” “Buy Food Here, 104th Street”), and a carefully maintained street devoid of vehicles when the Psionic’s preferred mode of transportation is that of the portal: quick, small, and—if done right—quiet and seamless.

A community of men and women in neatly pressed blazers, suits, and leather briefcases, rarely speaking aloud when they much prefer the conversation of shared thought.

To the southwest, a technological marvel far beyond what any other city in the realm could devise. A chaotic marriage of recklessness and innovation, practicality and intrepidity, security and audacity. Sleek blue glass skyscrapers carefully split at the center, giving way to a seemingly mindless tangle of smooth, narrow roads, lopping and zigzagging as high up as a thousand feet in the air. Holograms dictating everything, from directories assistant lost tourists to signs beckoning the wandering outsider inside.

There is never a moment of peace, as the Electromancer is constantly innovating, and with innovation comes reconstruction and reconstruction, and more reconstruction, until the district is plunged into the future so thoroughly and unrecognizably compared to its sister districts that the sidewalks become automatic at the traveler’s behest and the streets themselves thrum with a constant electrical pulse.

To the north and northeast, a merging of shared ideals. Two districts brimming with life spilling into one another, the Elementals (Geos, Aeros, Pyros, and Hydros), protecting the life of the earth while the healing Alleviate protects the life of her inhabitants. The closest district to nature the highly advanced and magically-immersed city will ever get, connected with roads of lush greenery, fruits, and flowers lovingly tended to by the city’s most conservationist civil engineers. Buildings sprouted from the ground, always wrapped in vines like a gift from the Mother herself. The city’s agricultural center, where animals trod, gallop, flutter, and skitter alongside the Crux who share their home; a natural harmony.

Yet also, a clashing. A singular brick building, wrapped not in healthseed or grayrose vibes but thorny needlefeed vines, wreathed in poison. A tiny pocket of life-givers trained instead as life-takers—choking, poisoning, crushing, impaling. The living incarnations of the brutality of nature.

To the northwest, a hole where a district should be. An discarded lot of dilapidated bungalows, flickering street lights, and trash peppered throughout the filth-ridden, cracked streets. A cursed red light district in which—aside from the Hexxers relegated to it—only the most depravedly lustful and sexually masochistic Cruxes ever set foot. A place in which sleeping in the streets is no different than sleeping in the small, roofless huts of rotting wood, infested with all manner of five-to-eight-legged creatures.

Bodies wrapped in tattered cloaks huddle for warmth, some moving on the rare occasion, some as stiff and as cold as the death that had claimed them. Spine-chilling shrieks piece the air, a sound as common as the song of a bird or the chirp of a grasshopper, for a desperate Hexxer is a Hexxer who uses his unholy ability in defiance of the society that has shunned him as much as he uses it for his own survival.

A merging of the best of every class, from the highest Alleviate physicians to the greatest Psionic investigators. A center of wealth and prestige, where the focus and ambition of the Electromancer collides with the energy and creativity of the Imaginate. Where the patience and erudition of the Psionic combines with the compassion and poise of the Alleviate.