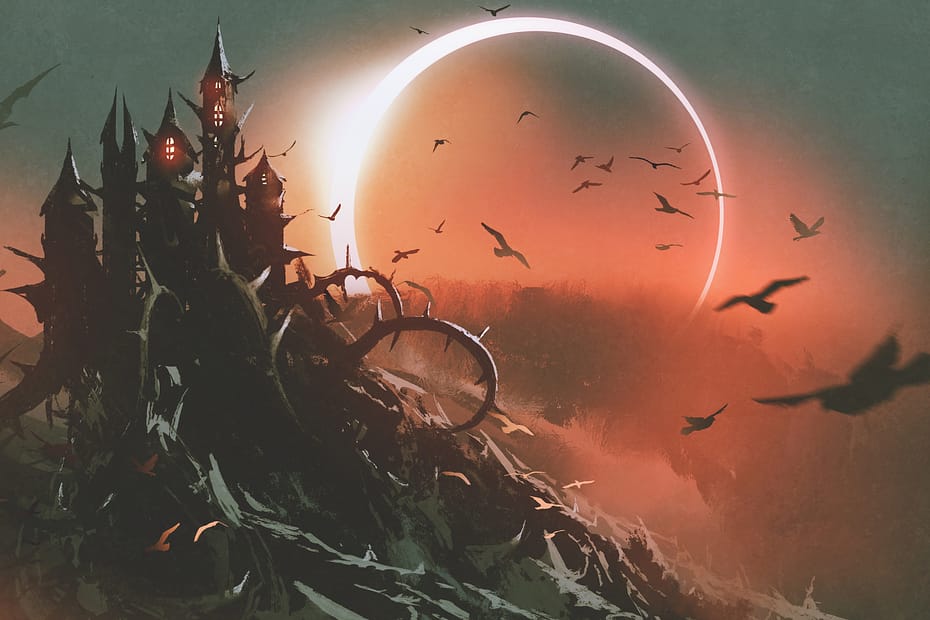 Are you getting a sense of déjà vu?

We did this once before, but the possibilities are endless, so why stop there?

Here are 7 (more) unusual ideas for a story setting.

Hear me out. What if we got all *meta*? A story within a story within a story. Maybe your character has been transported into a book, either existing or one purely of your own imagination. Maybe they’ve always existed within a book and some event has caused them to become self aware. How do they handle the existential dread of realizing they’re nothing more than a character in a book, a concoction of some unseen being’s mind? Is their story world in danger? Do other characters know they’re in a book? How can you play around with this concept to present your characters with more obstacles, or allow them to use their creativity to get out of sticky situations? For example, can they skip pages within the book to know what happens next, or move back a number of pages to redo an event?

What about the antagonist? Can they summon monsters or enemies from other books, or manipulate the narrative somehow? If the antagonist is the actual writer of the book–a literal god as far as the characters are concerned–how can they counter someone with so much power over their lives? What are the limits of the writer’s power, and how can the protagonists exploit those weaknesses to win?

Are you creating new books that your characters find themselves in, or making references to popular and classic books (Huckleberry Finn, Moby Dick, and Romeo and Juliet seem to be make frequent appearances in these kinds of stories)? Both pose different challenges and opportunities, so it’s ultimately up to you and what you want your characters to experience.

The dreaded “He woke up, and it was all a dream…” cliché, except it’s the entire story. Like, intentionally.

Dreams are weird. Literally anything can happen for any reason at any time, and the weirdest thing is that your dream self just kind of accepts it as reality. It’s something we’re so used to because dreaming is just something we accept as part of sleeping (at least, if you dream often), but it could make for a great horror story if your protagonist is trapped in a dream and doesn’t realize it. Think A Nightmare on Elm Stream or Come True, or any other horror movie focused on dreams and nightmares, but the focus is instead on being trapped in the dream and continuing to accept the increasingly absurd and horrifying things happening to you.

One of my favorite Junji Ito stories is “Long Dream,” where a patient suffers from, you guessed it…increasingly long dreams. Dreams test the limits of the mind and reality, and done right can give your reader an serious existential crisis. What if you dream a whole other life and wake up to find it never happened? What if you dream an eternity in the span of one night? How would your mind cope (if at all)? And what if the line between dreams and reality become blurred, a la Inception?

A dream is the kind of setting that gives you so much creative freedom. And while I usually think of horror stories when I think of using them as a setting, dreams are so absurd that they can be the setting for any genre you want them to be…or even all of them!

Some possible ideas for where your characters can end up if they either exist in or are suddenly transported into cyberspace: the literal code (Fairly Oddparents again comes to mind, particularly the episode “Information Stupor Highway”), games (Free Guy, Ready Player One, Gamer), social media, forums, maybe even YouTube or TikTok videos.

How will they struggle with these unique encounters? Will they face off against the users? A hacker? Whoever or whatever trapped them there in the first place? And if someone is after them, why? What do they gain from eliminating the protagonist, or from trapping them in cyberspace in the first place?

If your character is navigating, say, Twitter or some other social media platform, can they control someone’s account or manipulate what’s posted? If your antagonist possesses that kind of power, how would they use it?

If your protagonist is trapped in a video game, is death permanent? Do they only escape by winning? And what about videos? Can they alter them? If the video ends, do they die? Are they suspended in time and space until the video is played again?

These are all just things to consider, but the internet is virtually (ha, get it?) limitless, so you can focus on any one of these things, all of them, or something else entirely.

4. In A City That Spans the World (“Ecumenopolis”)

One big, unending city. Neighborhoods that span entire nations. Everyone under one province.

How would this massive, world-spanning city function? What’s the population, and how are crucial supplies gathered? Usually cities of this caliber boast highly advanced technology and a highly efficient means of production, for everything from food to clothes to tech, and everything in between. If you set a story in a unique, massive city like this, there’s so much you can play around with: are different “neighborhoods” still ruled by different factions, or is everyone under the same leadership? How is the city organized, and how might the city’s layout play a role in the protagonist’s trials and tribulations? Who could play the role of the antagonist? If we were going for something large-scale, it could be a mob boss, the CEO of a megacorporation, intergalactic threats, or even the leader of this massive city. Or it could be a shadowy killer, a stalker, or just the everyday challenges of living in a city that spans the world (population density, lack of resources).

When we think “the whole world is one big city,” we might think “cyberpunk dystopia.” But what if you wrote a science fantasy? Urban fantasy? Epic fantasy? How do you picture a ecumenopolis where dragons, angels, demons, and magic exist, and what goals might the protagonists have there?

Similar to the storybook and cyberspace settings, this is the kind of setting where the story can get real meta real fast. Maybe your characters jump channels (if you grew up on Fairly Oddparents like me, you might be thinking of the “Channel Chasers” TV movie where the characters navigate a bunch of different parodies of TV shows), or they’re trapped in a single show or movie.

A setting like this gives you the opportunity to add your own twist to common television tropes. You can pay homage to shows and movies you love, while poking fun at the ones you don’t. I find these kinds of settings to be a great balance between manipulating existing tropes and challenging your own imagination and creativity. How will your characters respond to being transported into a reality show? A horror movie? A wacky cartoon? What about a soap opera? An anime? Hell, what about even a news broadcast? What kind of commentary can you make, and what kind of obstacles can you put in your characters’ way using the power of television?

This kind of setting gives me parody vibes for sure. But you could also play it straight and give each show its own myriad of serious problems the characters have to deal with. Maybe they’re transported to a game show where losing means death, or real secrets about the characters are exposed to each other (if you’ve seen or heard of Moment of Truth, you know what I’m talking about). Or a sitcom where going off-script turns the sitcom characters against them. Or a horror movie where…well, you can probably guess how that one’s going to go.

6. In a Confined Space

Whether it’s a thriller where the protagonist is trapped and must find a way to survive until they are rescued (127 Hours), a horror meant to make you feel claustrophobic (The Descent, Devil), or a story where the setting isn’t necessarily even the main focus or obstacle, but the plot is nonetheless confined to one space (12 Angry Men, Misery).

The challenge here is making the story engaging while limited to that one location. How do you keep the audience interested when the characters are in one room? Or, even more limiting, if there’s only one character in one space with no one to even engage with? What obstacles are they facing, and how do they attempt to overcome them?

In settings like this, the obstacle is usually to get out. In The Descent, the characters are on a caving expedition that takes a turn when they get lost and become the prey of subterranean creatures. Here, the obstacles are 1. the cave and 2. the monsters out to kill them. Their ultimate goal is escape.

In 12 Angry Men, the goal is likewise to escape (sort of), but the circumstances are much different. The characters are 12 men on a jury, tasked with determining the fate of a murder suspect on trial. Here, the obstacle is the conflict with each other, and the deliberation that will ultimately decide if someone lives or dies.

Whatever story you’re writing, keeping it limited to one setting poses some unique challenges, but also gives you the opportunity to test your writing chops and see how much conflict and tension you can develop without the aid of many outside forces or places for the characters to go.

A small, confined space not unusual enough for ya? How about…nowhere at all?

What is “nowhere?” How does one define it? And what is it like for a character who suddenly finds themselves nowhere? Do they exist anymore? Does anything exist “nowhere?” Anything dangerous, perhaps?

When we think of “nowhere,” we probably think of something we have to escape. Because the very concept of not being anywhere at all is terrifying. It reminds of us death and the fact that we’ll all face it someday. We don’t even know what it means to die, and yet we must come to terms with the fact that, if an afterlife does not exist, someday we’ll all be…nowhere. It’s hard to even fathom.

Does something evil lurk in the nether? Is it an endless nothing from which your protagonist must escape lest they lose their mind? Or is it something our mortal minds cannot even register, something too beautiful or too horrible to comprehend? Something we understand so little that we can only perceive it as…nothing?

What if the character is entirely deprived of their senses? Do they feel trapped, confined, or is it an enormous, endless nothing like the vacuum of space? And most importantly, how do you keep the reader with them on this unusual journey of absolutely nothing?

(Hey, if you liked this article, check out the first one!)

previousTwitter for Writers: How to Maximize Post Engagement (2022 Update!): Part 1
Support me on Kofi!