Home » 5 Tips on Writing Non-Binary and Other Non-Cis Characters, by Dominic

5 Tips on Writing Non-Binary and Other Non-Cis Characters, by Dominic

So, you want to write a character who is not cisgender? Perhaps someone who is non-binary, genderfluid, agender, or some other gender outside the binary? You’ve come to the right place!

Keep in mind, gender is a super complex social construct and has as much variation as there are people on Earth. These 5 things to consider are just a starting point, but important things to think about when writing a character who is not just a man or a woman.

Tip #1: Think About Gender Dysphoria/Euphoria (If Any) 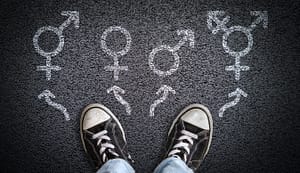 Gender dysphoria and euphoria get brought up a lot when discussing non-binary people and any other trans identity. Put simply, gender dysphoria is the discomfort you feel with the gender you were assigned at birth while euphoria is the confidence and happiness you feel when your gender fits more closely to who you are.

But before we dive too deep into this, there are a couple disclaimers. First, you DO NOT need dysphoria to be trans. Many people may claim this, even trans people themselves, but the greater consensus of the queer community and scientific community is that dysphoria is not required.

Secondly, not every trans person goes on hormone treatments or undergoes surgery. This could be for a number of reasons such as cost, social stigma, or just not feeling the need. Unfortunately, the media tends to focus on others who feel surgery and hormones are a necessity, which pushes aside many trans people and makes them feel invalid if they don’t conform to this narrative of what trans people “should be.” There is no single way to be non-binary or to be any other trans identity.

Now that that’s out of the way, you may want to think about different types of dysphoria and euphoria. Oftentimes, dysphoria manifests in two broad categories of physical and social dysphoria.

Social dysphoria, on the other hand, might include things like not feeling comfortable with the pronouns you have, not liking the clothes society says you should wear, or feeling discomfort with your name.

Overall, no trans person has the same experience. Some people want to change one aspect of themselves but not another. So take things like dysphoria and euphoria into account when writing a non-cis character, whether or not they are present in the character’s experience.

Tip #2: Think About If the Character’s Gender Has Any Cultural Significance

Many gender identities outside the gender binary also have cultural significance to a character or some special tie to their heritage. When in doubt, keep in mind that a more culturally-tied gender identity can generally only be used by people of said culture. Let’s look at some examples.

Oftentimes, these gender identities take on spiritual roles in their communities and cultures as leaders or blessed figures. It is also important to know that many of these identities underwent attempted erasure and extermination when faced with European colonialism. The femminiello of Italy is a notable exception, but the gender binary we see today is a huge product of centuries of oppression at the hands of Europeans.

Gender identities are vastly intertwined with race, religion, and culture at large. As mentioned before, labels tied to culture should really only be used by members of that culture. Nevertheless, this is an interesting facet to consider when building a character outside of the binary.

Pronouns are another important part of living outside the gender binary. Like any other part of the trans experience, the potential for variation is infinite from one person to the next.

For example, I am non-binary and I use he/she/they pronouns. Someone else may do the same or perhaps use she/they or he/they. Yet another person may use neopronouns such as ze/zir or fae/faer. Pronouns are a common way many trans people first experiment with what their identity means to them. Pronouns may come before a gender label or after. A given person may not label themselves at all!

In particular, pronouns provide a unique opportunity for representation that writers can utilize seamlessly in their stories. Pronouns may be changed regularly in dialogue or from one sentence to another when writing in third person. In essence, pronouns provide a way to showcase gender identity while keeping a character three dimensional and not solely defined by their gender. Gender is important in life, but trans people have interests, goals, and needs outside of gender too! We deserve to be treated with respect like everyone else.

Tip #4: Think About Real World Stereotypes and Harmful Tropes That Trans People Have to Face

All this is ultimately important to know because art and stories reflect and shape the real world. Even unintentionally, writing without a second thought may perpetuate stereotypes and tropes that lead to real world harm for trans people, from anti-trans legislation to violence against trans people.

Analyze different media and see where harmful assumptions have been made in the past. Was a trans person portrayed as the butt of a joke simply for being trans? Was a trans character fetishized, especially if another character didn’t point out the harm in that?

Even within the non-binary community, there are a variety of inside jokes and discussion that people outside queer spaces won’t immediately grasp.

For example, there is a tendency in media and in real world perceptions to see all non-binary people as assigned female at birth, only to remove their breasts and cut their hair. One might call this seeing non-binary as “diet woman” or “woman lite.” Even if a character fits this stereotype, insisting this is the only way to be non-binary erases those of us non-binary folks assigned male at birth.

Another example might be that non-binary people have to be skinny and white. This is a common harmful stereotype as well and plays into the disproportionate harm faced by trans people of color every day.

As brought up before, gender ties into so many other aspects of society. Think about how a character’s gender identity might be further complicated by their race, religion, or location in the world. Intersectionality matters and good writing should reflect the wide array of trans experiences across the world.

The last and potentially most important thing is to never stop researching and listening to the stories of trans and non-binary people.

It is again the fault of media narratives that so many people think trans people always know themselves right away. This may be the case for some, but many trans and non-binary folks struggle with self doubt and shame, oftentimes repressing their truest selves in the process.

This does not mean they are any less trans for not knowing immediately.

But rather, this is the fault of cisgender being pushed as the default in society for so long. When trans people have to hide and defend their own identities for so long, transphobia can be internalized unintentionally.

This partly explains the LARGE amount of transgender coming out and support videos online. Thanks to the internet, more trans and non-binary people are able to connect with each other and share their stories worldwide. Thankfully, this gives writers a mountain of firsthand stories that should enrich your own understanding of the trans experience and what that means for a trans or non-binary character.

I can’t tell you, as a non-binary person myself, how many hundreds of hours I must have spent watching videos of people like myself, taking online gender quizzes, visiting trans online communities, and so much more.

To really get the full scope of what a trans or non-binary person experiences, I encourage writers to never stop looking for new firsthand stories. Listen, research, and understand more.

Not only will it enrich your characters, but it will also show you the beauty of what it means to live outside the binary.

Dominic is a freelance writer and author from Connecticut. They’re getting a master’s degree in Communication. They love sci-fi, fantasy, EDM, and pizza.

You do not have any posts.

1 thought on “5 Tips on Writing Non-Binary and Other Non-Cis Characters, by Dominic”

previousFun Ways to Subvert the Chosen One Trope by AK Nephtali
next8 Fantasy Story Plot Ideas that Don’t Involve Quests
Support me on Kofi!