Home » In Defense of the Overpowered Protagonist by M.C. Burnell

In Defense of the Overpowered Protagonist by M.C. Burnell 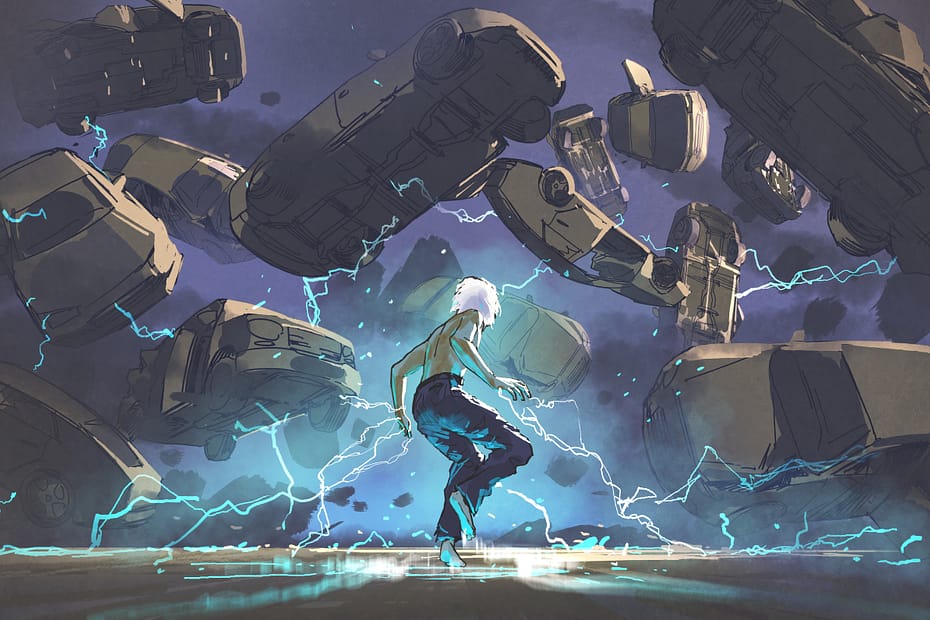 It’s become axiomatic that almighty heroes are boring and shouldn’t be attempted. Superman isn’t just lame because he’s the straightest, whitest, driest toast conceivable, with a disguise so flimsy it wouldn’t fool Scooby Doo; his superlative powers themselves are tiresome.

Well, I don’t know about you, but I don’t write speculative fiction so I can tell stories about ordinary people like you and me living ordinary lives bereft of pyrotechnics.

Don’t fear this cleft stick: you can still make an overpowered protagonist with the ability to rip the world in half so long as your readers aren’t sure the hero can or will put those powers to use.

The key is to keep them guessing.

At the end of the day, the only question is: was suspense maintained? The writer’s real enemy when it comes to superpowers isn’t the powers themselves, it’s a situation where the reader feels like victory is foreordained. The hero can’t possibly fail – it doesn’t even make sense – and what cause then has anyone to go on reading to the end? You can’t let readers think they know where the story is heading; any given straightforward situation ought to feel like the setup for a paraprosdokian. Below, some thoughts on how to make certain your readers are as deeply uneasy as you need.

A flamethrower might as well be a whiffle bat if your hero can’t actually make use of it. You can work limitations into your magic system or your lore that prevent your hero from bringing their flex to grips. If your hero has a solid reason to keep their power under wraps, hey, what power? Then they’re every bit as -vincible and relatable as any Jane-average on the street. Two variations on this theme:

Said the Hero to a Desperate World: “idgaf”

I keep saying ‘hero,’ but we’re actually talking about your protagonist, and there’s a difference. They don’t have to wear a cape and overflow with righteousness; I’d be quite happy if you answered no to both. Maybe your hero feels a sense of disaffect toward their society or the specific people whose struggle is at issue. Maybe they’ve aged out of giving a damn. Loss or trauma have laid scars across them that preoccupy them. In any case, no amount of power matters if the person who holds it isn’t motivated. The story isn’t Can they win? it’s Do they care to?

The Babe With Power

The thing about walking a maze in the dark whilst blindfolded is that you can be carrying a rocket-launcher on your shoulder and you’re still lost. I love stories where the hero doesn’t really understand what’s happening. Ignorance is a potent and versatile weapon for a writer, and I recommend making liberal use of it. When a character shrugs off meaningful information because they don’t want to deal with it, that’s frustrating; when a character can’t figure out what the information means, that is fascinating. So maybe even you’re super overpowered protagonist is limited by the fact that they:

Here’s a twist: the hero isn’t the person who gets to make the call on unleashing whatever makes them so god damned swish. This is especially appealing because it adds a whole new layer of tension: not only is the reader now waiting with bated breath to find out if Hero will finally pull out all the stops and let themself roar. They’re wondering if Hero is going to come into conflict with Boss. Is Boss worthy of being obeyed, and will disobedience carry consequences?

Uber Villain to the Rescue!

As straightforward as it is beautiful: your antagonist and protagonist are twins. Either they have the same power, or they have opposing powers that cancel one another out. The point isn’t to nullify your hero’s flex as such, just make sure the reader doesn’t feel as if the outcome is preordained. If Hero can’t overpower their true enemy, you can still give them some epic pyrotechnics without robbing your story of suspense.

So obviously, Superman isn’t my cup of coffee. But I do wholeheartedly support badass, intense heroes who tear shit up when they feel like it and don’t apologize for lighting up some fireworks. This only works if you do it right, and there are a few pitfalls you need to be wary of as you plot your hero’s twisty journey to their eventual The End.

Pick Up the Phone

Nothing knocks me out of a story faster than a contrived setback. A crucial conversation has to be delayed because it needs to take place at a particular time of day; an otherwise insightful character fails to understand a pattern so obvious it might have been painted on their face. This doesn’t just bug me, it makes me put a book down permanently.

I assembled the list above because there are so many ways you can screw your hero over without disrupting your narrative and insulting the intelligence of your audience. When you introduce a fly into the ointment, just take a moment to double-check that your characters are still acting like themselves. No one is failing to reach for an obvious solve for no better reason than because it’s convenient for the author.

Rules: They Don’t Exist to be Broken

You went to all that trouble to make that magic system or wild sci-fi tech: use it. Readers can’t trust you if you don’t follow your own rules, so do. Once you get into your own world and look around, you’ll find that these rules are so much more than stale, dry facts. The way in which they delimit you is actually one of your more useful tools. These parameters help to shape your story as well as your world; they don’t just give texture to action scenes, they’re what makes the story make sense. Each time you smack your protagonist into whatever it is that’s holding them back, it makes the lore more credible.

You’ve got the pieces in place, ready to craft a mighty protagonist who doesn’t bore readers to tears with their awesomeness. Go set your virago forth on the world!

If you liked this article, find more thoughts from the author on speculative fiction and writing tips at Meaghan Dreams!

previousFantasy Steeds and Battle Animals: Which is the Best Option For You? by Des. M. Astor
nextTop 10 Scary SCPs to Keep You Up at Night